On Saturday, February 11th, we gathered around Darin Latimer, Summer Radtke, and Kari Lynn Krauss to learn more about artist James C. Harrison – his life, his work, and his influence. It was a casual, but insightful conversation with Darin, as co-director of Harrison’s estate, and Summer, co-curator from Schmidt’s Antiques where Harrison’s work was rediscovered, talking passionately about a great American artist, giving him the attention he deserves. Kari, a fiber artist and co-founder and educator at Water Street Studios, provided an artistic evaluation of Harrison’s work after seeing it in person for the first time. The audience asked questions about Harrison and inquired about specific works within and without the exhibition. The works were taken down from their place on the wall or brought in from storage to examine them in their individuality as well as part of the larger collection.

Harrison’s inspiration comes from his obsession with symbolism, astrology, and cosmology – a constant battle between lightness and darkness that in some ways mirrored Harrison’s battle with addiction throughout his adult life. Of all of Harrison’s obsessions, the most encompassing was his obsession with Jung. He was trying to explore and figure out the idea of pre-existing forms which only come to conscious secondarily. The above and below, the dark the light, the self, the shadow, order/chaos. They intertwine, making them difficult to define, but they were all there and come in different forms seen throughout his work – diamonds, squares, tree, emerald, circles – all with some underlying meaning.

He dug deep into the soul and had no time for uninformed criticism, which Darin suggests might be a factor of why his work remained relatively unknown. Many of his works contain inscriptions on the back with various dates as he thought through his process, revisiting works again and again and again. Summer read aloud her favorite inscription from My Emerald Doors (1978):

“Ascend with great intelligence from earth to heaven and again descend to earth and unite together the powers of higher things and lower things. Thus, you will receive the glory of the whole world and darkness will fly away from you.” (James C. Harrison)

Another quote that came up reflects Harrison’s process and came from artist friend Chris Martin and Harrison himself:

It was important to all the artists who knew him, after Harrison’s passing, that he would never lose his integrity. They all said this in past interviews with Darin.

Harrison’s lasting influence lives within the memories of these artists who met him and talked to him about multiple subjects surrounding his work and the books on his shelves. Harrison didn’t have much money-wise, but in exchange for studio space, he became an important hub for artists while living in Brooklyn…and for many cats. Artists would show up with a six pack and Harrison would set up one of his works on a milk crate. They would often talk for hours. 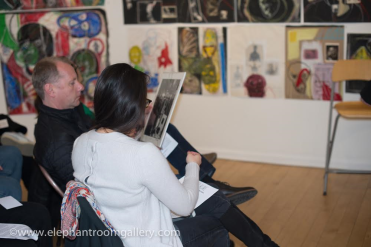 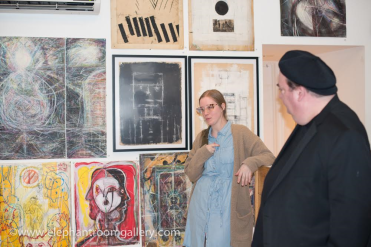 After approximately 25 years in storage and almost being dumped into an auction, Harrison’s work is finally, rightfully, stepping into the spotlight. It was a refreshing and relaxing take on a panel discussion, which in and of itself reflects Harrison’s character. After the talk, wine was passed around, Harrison’s scrapbook was taken out of its display case, and smaller group discussions and conversation took place.

The last story of the night, told by Darin, relived the time James was walking home with another artist friend, Peter Acheson, and they came upon a statue of Theodore Roosevelt. James, or Jim, as Darin likes to call him, stopped suddenly in front of the statue and talked to Peter about Theodore Roosevelt for at least twenty minutes. This perfectly sums up a typical night with the intelligent and philosophical artist, James C. Harrison.