Diane Christiansen is a Chicago based artist whose work has been shown throughout the United States and in Europe. Her practices include painting, drawing, animation, and collaborative installations. Her new collaboration piece Birth Death Breath, an Inflatable Object is currently showing in the Elmhurst Art Museum. 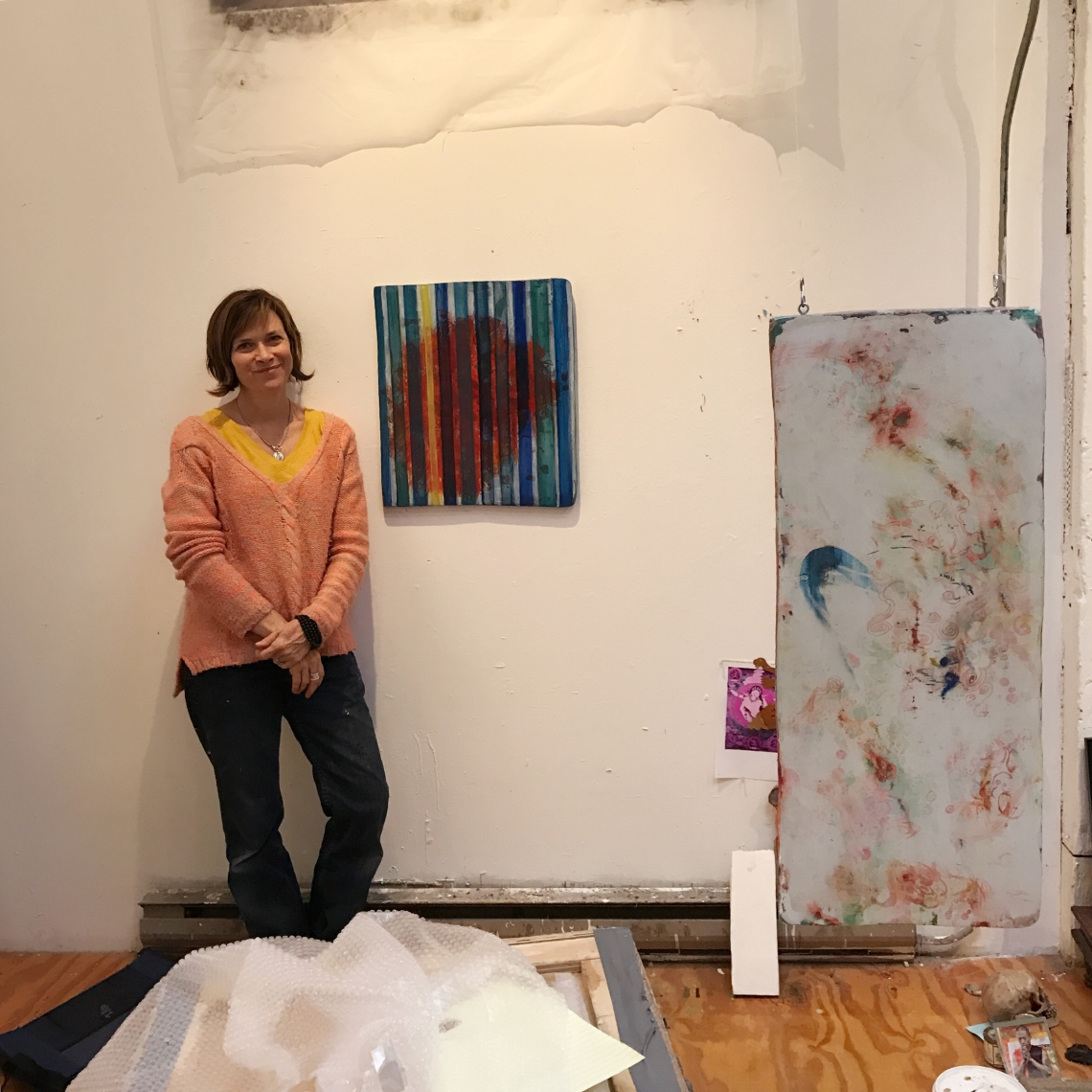 Cui: Give me some general background of yourself.

Christiansen:I grew up in the Midwest, in an academic family. My father was a professor. I lived in Grinnell, Iowa and in France as a kid. My travels as a child in France, Italy and Spain, completely influenced me to become an artist. I went to undergraduate at Grinnell College in Iowa. And I did a year in Kansas City Art Institute. After that, I worked awhile as an artist. Then I moved to Chicago. I went to graduate school. First, I became sort of disillusioned with the art world; I decided to do something that had more actual impact. So I decided to become a therapist. I started part time at Loyola going to social work school in order to work as a therapist for children. And then I applied for the Art Institute just on a whim, almost to see if I could get in. I did get in and I got a fellowship, so it was free for me to go there. So I did two graduate schools at once.

Cui: How did you get into animation?

Christiansen:First I should say, the year I turned nine living in France. My sister and I, made a series of cartoon characters, we call DUMS. I think in a lot of ways all my art works harkens back to that year when I had a very profound clinical depression. And I was sort of medicating myself by making stuff. We made these cartoons of creatures that we call BOYS out of old sheets. My mother and father hadn’t brought us any toys. We lived for a year overseas playing mostly with toys we had made ourselves. So we made these toys and animated them. We would draw a face on a sheet and sew some stuff into it giving it arms and legs. I think I started exploring animation as a kid and exploring what it was to create a character, and a kind of an absurd narrative around it. Much later, I was a painter making two-dimensional images. I just started basically wanting them to move. I had some character based, cartoony painting I was doing in gouache. I literarily made body parts and started to make them move. It’s like I invented something so exciting to myself even though it’s so freaking basic. From there, I talked to a friend of mine who was making animations. And he said, we could totally do this in the most basic way. I think this was a really deep yearning to get back to this way that I navigated my life as a little kid. I had some really horrible stuff happen to me that brought on this depression when I was very young. I sort found my way out of it with this world of creatures I animated. Without knowing it that was what I was doing, in making my paintings move. And also creating characters in my paintings. I had a character named Cocoon girl that showed up over and over. The first animation I made featured Cocoon Girl.

Cui: I didn’t read your painting as character based works at all. Visually for me, they are abstract, yet I can see the movement within them. What’s the connection between two mediums?

Christiansen:Back to when I was first animating, which was 2005 or 2006, the reason Cocoon Girl is not on my website is because I didn’t compose the music. I got caught and they took it down. At the time, I was making a lot of painting that had characters and was much more narrative. There’s still a great amount of narrative, if not representational elements in my paintings. At the time, my paintings had much more representational elements in them. They were much more fully mixed abstraction and representation with some of the themes that are still there. In the Inflatable Opera piece, the absurdity meets tragedy. It’ s very literally in the paintings. It made a lot of sense for me to turn those paintings to animation. And then it’s almost as if animation became the place that I could do this narrative work; painting became more intuitive and abstract. I used to work a lot from my drawings. So I got a lot of thematic things from my drawings that would go into the paintings. Not that I was making a direct line but there’s this sort of falter for the paintings. I think when I started to animate. It almost split into three things, one being animation where I could full bloom have these characters and line drawings, paintings that are much more like mystical conjuring to me, experiences that I really don’t know what’s coming, and what am I inviting, projects which I collaborate with two artists dreaming up something that might have elements from my painting and animation. It’s almost like painting and animation are forks on the road. I’m going down both forks at the same time. Back to 2006, you would see, this is this painters animation. They look the same.

Cui: In your animation works, there are always creatures that are combined with different animals’ parts. What’s the idea behind them?

Christiansen:It’s funny, I am in many ways not a conceptual artist, I often make and then I realize why am I making. I was able to make animation then realize it was my first impulse as a kid. I think if I really examine the different animal parts there is a sort of ongoing curiosity with soul exchange, how we rub up on each other. One of the basic tenets of Buddhism is that there’s an oneness. Here, we are sitting here right after I euthanized our pet rat. My husband and I were lying there as she was dying talking about how she seems to sort of embody sweetness and empathy. She is so empathetic with her sister rat that she takes care of all the time. Even though she got to have a brain size of an apple seed or something. Still she is able to have a soul. I think there’s something about soul exchange without knowing it. I have been playing that for years. I have been obsessed with death, what happen and what exactly happen with nature of consciousness for years. And nature consciousness for animals obviously, I am drawn to not see myself of distinguish from anything else. 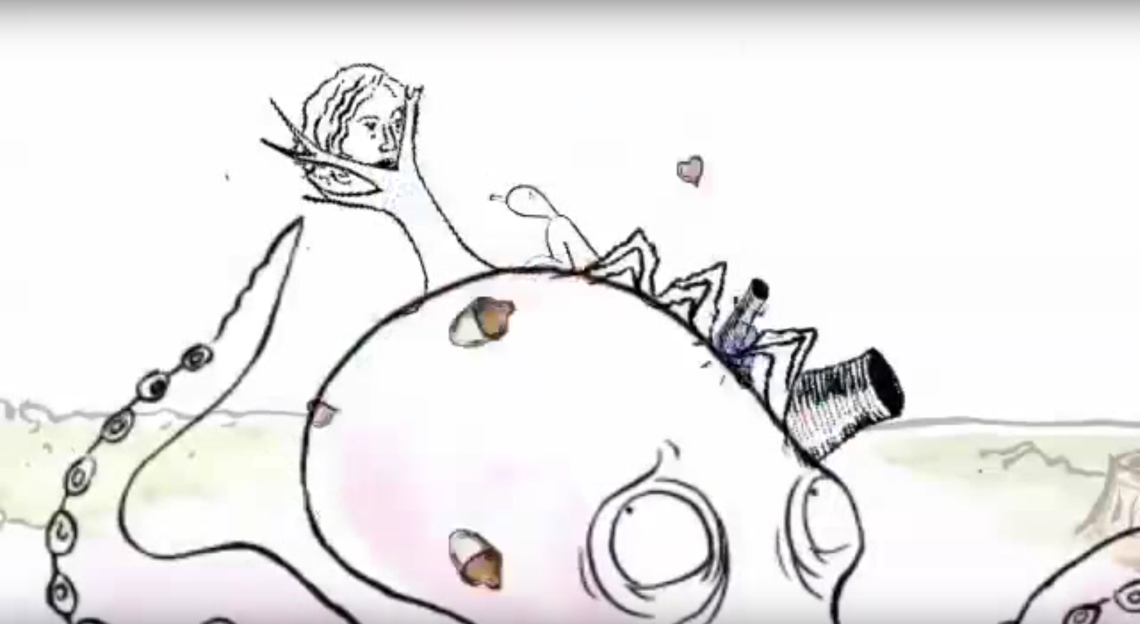 Cui: What about Buddhism practice and your artist practice?

Christiansen: Someone who I love to refer to is Natalie Goldberg. She is a Buddhism writer who wrote a book called Writing Down the Bones about creativity. She is from a different Buddhism lineage than me. She is a Zen Buddhist. Her teacher told her that for her, her practice was really writing poetry. She could be most present and available to the world doing that. For me, it’s interesting you would be asking this question. I was just talking to someone about how my meditation practice is really gone down hill, since working on these two projects (Inflatable Opera and Dear Stuff) at the same time. I have been so taxed for time. The other thing I am really yearning for is my painting practice, which is very much a meditative practice. There are two things. There are Buddhist themes that appear in my work transparently. For instance: skull as a symbol of slaying ego and other iconographic pieces that you can find in Tibetan Thangka paintings. There’s the obvious stuff. Most importantly, the actual practice, not doing these collaborations but paintings and drawings are a really grounding meditating, connected spiritual practice to me. I haven’t been doing it for four months now, I almost feel like, I have lost the thread. It’s very similar. I used to start my day by meditating. And then I will draw. It’s the most present time I get in life. Here now, it’s either being with someone I love, drawing and painting and singing. Those are the three most present times. The rest of the time, I am rushing to the future, I am with past, I am making a list. You and I have met while I have been working on these projects. I have not been really centered. The actual act of painting to me is similar with what Natalie Goldberg said; the act of making art is the meditative act.

Christiansen: It’s terrifying, but I was in the ally getting ready for cleaning up the studio. I found a fortune from a cookie right by my gate. It said, “ A fascinating project is in your future.” I said, “NO!” So what’s next is me returning to painting and animating, grounding myself in those practices. I would hope what’s next is not consuming myself in any kind of product and simply reengaging myself into the act. Get back to my seat, literally on the floor of my studio.

Yingting Cui(b.1994 beijing)is a Chicago based artist currently study in School of the Art Institute. Many of Cui’s work are based on first generation immigration experience. The embedded water represents “melting pot” between continents accompanies with the force of silence and dissolve. Immigrants are stuck into it with no acceptance from both sides of the culture. Her work has been shown in Second Life Rainbow Gallery. She works often created through photography, video, new media and sculpture. Recently, she starts to work on works associated with The Great Fire Wall of China. View all posts by yingtingcui

This is a text widget. The Text Widget allows you to add text or HTML to your sidebar. You can use a text widget to display text, links, images, HTML, or a combination of these. Edit them in the Widget section of the Customizer.
%d bloggers like this: